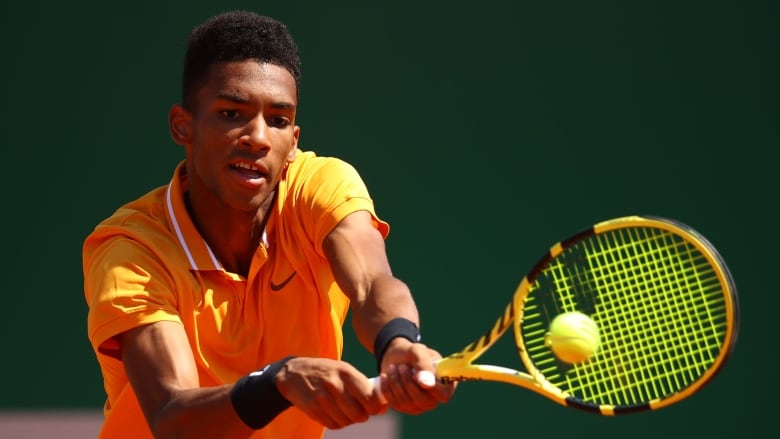 Canadian Felix Auger-Aliassime completed just 52 per cent of his serves in the second-round loss at Monte-Carlo Masters. (Clive Brunskill/Getty Images)

The third-seeded Zverev won the match 6-1, 6-4. The German finished making 75 per cent of his first serves, compared to 52 per cent for Auger-Aliassime, of Montreal. 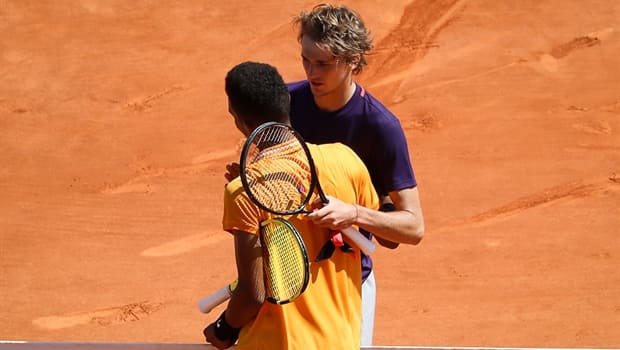 In other action, Kei Nishikori bowed out of the tournament after dropping a 7-5, 6-4 decision to Pierre-Hugues Herbert.

The fifth-seeded Japanese player, who lost to Rafael Nadal in last year’s final, failed to convert any of his 10 break points against Herbert.

The unseeded Herbert will next play ninth-seeded Borna Coric of Croatia..

Rafael Nadal back in action

Back on his favorite surface, Rafael Nadal showed no lingering effects of a recent injury as he breezed into the third round of the Monte-Carlo Masters on Wednesday with a 6-1, 6-1 win against Roberto Bautista Agut.

Nadal was making his season debut on clay and playing his first match since suffering a knee injury at Indian Wells one month ago, but the defending champion looked sharp from the start and secured an early break of serve for 2-0.

Aside from having to save five break points across two games — at 0-40 down in the fourth game and at 15-40 in the sixth— Nadal was otherwise untroubled by his Spanish countryman. The 17-time Grand Slam champion converted his first match point when he met his opponent’s strong forehand with a crisp volley at the net.

“I was able to move well and be confident in the things that I did,” the 32-year-old Nadal said. “Now what I need is to play matches, spend hours on court, and of course the victories help. Every victory is a positive energy, confidence in the game, confidence in the body. Today was a good start.”

Nadal is looking to win the clay-court tournament for a record-extending 12th time and increase his Masters record to 34 titles. He next plays Grigor Dimitrov, whom he has beaten 11 times in 12 matches. One of Nadal’s wins against the unseeded Bulgarian was in last year’s semifinal.

No. 4 Dominic Thiem, No. 6 Stefanos Tsitsipas, No. 10 Daniil Medvedev, and No. 13 Fabio Fognini also advanced to the third round Wednesday. But No. 5 Kei Nishikori, who lost to Nadal in last year’s final, was beaten by Pierre-Hugues Herbert 7-5, 6-4.

Tsitsipas downed Mikhail Kukushkin 6-3, 7-5 and next faces Medvedev. The Russian beat Radu Albot 6-1, 6-2, while Fognini had a walkover after Gilles Simon pulled out with a back injury and next takes on Zverev.

With files from The Associated Press

Expanding the Eye of the Storm
Plants and Beyond

Green Plants Based Living and Gardening

Let's do it just for today

For the Love of Photography + Stories + Gear

Motivation and inspiration is our vision. It is the key to success.

True wealth is the wealth of the soul